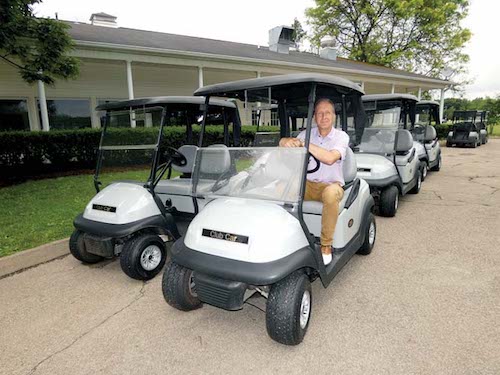 PGA golf pro Scott Karabin, owner of M2 Golf Management, has invested approximately $120,000 so far this year to improve the Old Avalon Golf Course on East Market Street in Warren, including leasing 60 new golf carts. Karabin is the new operator of the city-owned golf course after the previous operator terminated his contract early. The course will have an official grand opening this weekend, just in time for Fathers Day.

Karabin’s M2 Golf Management was awarded the operation of the once-troubled golf course in December and he plans its complete turnaround to be finished at the end of the 2020 golf season.

“We plan to take what, at one time, had been a burden on the city’s finances and turn it into a financial asset,” Karabin said. “We are working to change the perception of this golf course in the minds of residents and those in the golfing community.”

Karabin has doubled the size of the golf course’s staff from four to eight and began working on the greens, expanding the pro shop with new apparel and equipment. It also will be providing club fittings. The club house also will have new food selections.

“Our goal is to create a better experience for those coming from a five-county region of Ashtabula, Columbiana, Mahoning, Mercer and Trumbull, as well as attracting new golfers from Pittsburgh, Cleveland and even from Canada,” he said.

The course has been open since early March. This weekend’s grand opening is to let people know what is available and offer some $19.28 special packages, which commemorates the golf course’s opening in 1928.

Karabin believes the course lost some of its leagues because they did not like how it was operated under previous regimes. He has been reaching out to leagues that were playing on the course in the last several years, and even before that time.

“We’ve gotten some positive responses,” Karabin said. “There were some that thought the golf course would close and made league plans at other courses.

“Operating this is my dream and my livelihood,” Karabin said. “I’m heavily invested in making this work. It is not just a revenue source.”

M2 Golf Management already has invested $120,000 into the course during the first six months of this year.

“It is a little more than we expected,” Karabin said.

“The golf course is in much better condition today than it was at this time last year,” Karabin said. “But it is not where we want it to be. There still is work to be done.”

He admits there is work to be done on its bunkers, tees and fairways, and some trees and limbs need removed. The work has been slowed because of the unusually rainy spring weather.

The city contracted with Karabin because Old Avalon’s previous manager, Larry Petrozzi, announced in October he did not plan to operate it in 2019. The five-year contract he signed provided an end-of-the-year, 60-day window in which he could walk away.

The city is billing Petrozzi $18,000 for the unpaid balance of the contract it believes is due from the previous contract. It also is billing him another $636 for the cost of winterizing the golf course last year, which was supposed be done by his company.

“I sent a letter to Petrozzi telling him that he is to pay the $18,646.53 by June 13, or I would refer this to our law department,” City Auditor Vince Flask said.

Petrozzi, according to Flask, sent a response to the administration asking it to forgive the debt, which was denied.

“We have not heard from him since that letter,” Flask said.

Karabin said he wants the city to be more invested in making the golf course a success by supporting his efforts to improve it.

“I am doing work on things, such as irrigation system repairs, that should have been done long before I was contracted to manage the course,” Karabin said. “What I want is for this course to be a financial asset for the city long after I’m gone, and I expect to be here for at least another 15 years.”

In the meantime, Karabin has started a Junior Golf Program that has 42 people signed up, and has expanded its program of having high schools base their golf programs at Old Avalon.

“Our base will be the senior golfers, but we are working to reach out to the next generation,” he said.

Councilman John Brown, D- 3rd Ward, said he is pleased with the direction Karabin is taking the city-owned golf course.

“Our contract says the course is to be kept in a similar condition to other public-owned golf courses,” Brown said. “I’m pleased with the effort Mr. Karabin is making to make the golf course great again.”